Update: I now have developed bash benchmarking for both throughput (MB/s) and invocation (ops/sec) speed in my project, combined with all kinds of other improvements, so the content in this article was updated [2022-04-08] 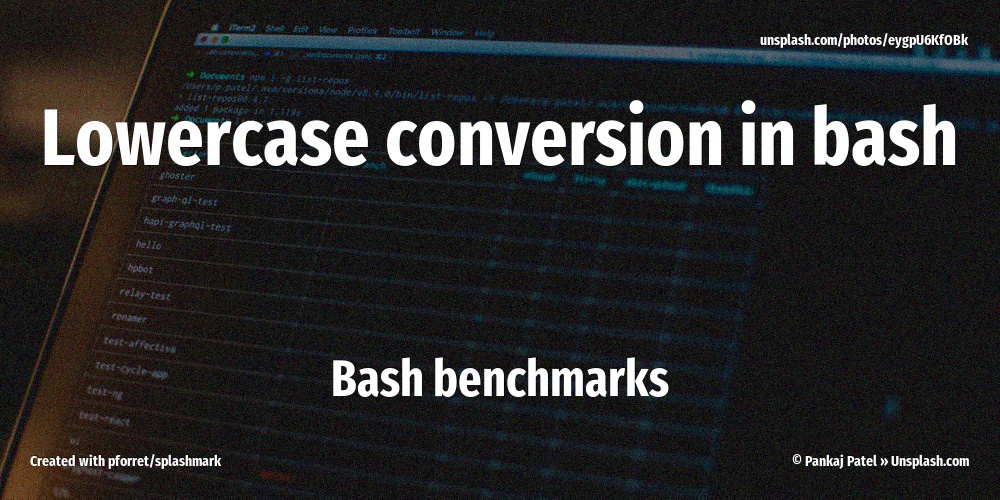 Let’s go through some different methods:

The easiest to remember method, and the one you see promoted most in how-to sites like Stackexchange, is by using tr. The command syntax is quite simple and elegant:

If we test this technique, we see the conversion is perfect:

sed is very fast, but doesn’t know the ‘[:lower:]’-type macros that tr has. So you have to specify every uppercase letter and its lowercase counterpart:

So the accuracy depends on the completeness of the list above.

In my first version of this post I overlooked an super simple technique, that is built in to bash: ${variable,,} will convert the content of that value into lowercase. If we want to convert a whole file with this technique, we have to wrap it in a while/do loop:

This technique also has perfect conversion:

If we can use awk or tr as an external program to do lowercase conversion, then why not php? Of course, you would first have to check if php is installed on your system (command -v php).This is what the code looks like in php:

However, strtolower has a problem with the accented upper case characters:

PHP has a multibyte/Unicode compatible alternative called mb_strtolower. This one does what we expect it to do.

And then there’s perl, which may be old skool/fashioned but is still installed by default on a lot of machines:

This simple code is also too simple, as it does not behave well for accented capital letters. To make the script Unicode compatible, one needs some adjustments. I admit, I had to look this up.

Now let’s see how all these methods compare in throughput speed (MB/s, when you start the command and let it process a big file in 1 go), and in invocation speed (operations/sec, which gives you an idea of the startup time a program needs.) Both are of the ‘more-is-better’ type.

So what is my recommendation for lowercase conversion in bash?

Idea: Automatic Expense Reporting • 15 Sep 2022 • Every end of the month, as I spend several hours getting on top of all my receipts, expenses and invoices, scanning barely legible paper tidbits with my phone, I’m thinking...