Slugify: clean up text to use as a filename/url

This consists of the following 3 operations:

It is even better to precede this with romanization (é => e) and conversion to lowercase, but I’m now just going to talk about the pure slugification. 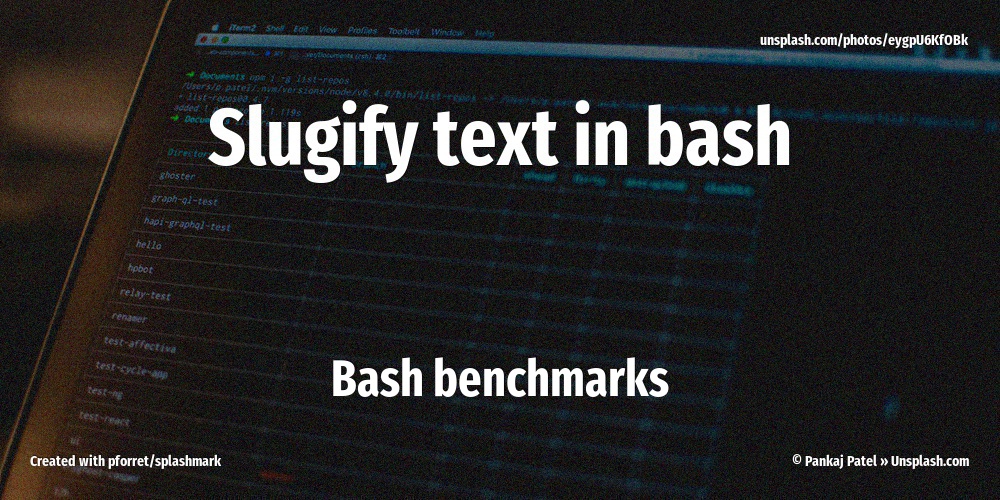 This is of course something that is easy to do in awk. It is just a sequence of gsub regular expression replaces.

Regular expression replacement is what sed does very well too, and probably faster.

I first tried this

and then, by just deleting 1 character, made it better. Can you spot the character? Check the speeds for both methods in the next chapter.

It is possible to do almost slugify with tr, but not entirely. The modifier -s can be used to indicate that groups of non-allowed characters should only be replaced by a single character, but there remains an issue with leading/trailing whitespace. Again, this could be solved by adding a 2nd piped tr statement. It’s just that, in this series, I try to do every task in just 1 statement.

As we have seen in previous benchmarks, it is interesting to also try to do everything in one (long) ${} statement, since these typically have an unbeatable invocation speed. This was my first trial:

That’s a lot of extra hyphens we still need to get rid of. Let’s try a series of ${} to replace characters and take care of leading/trailing whitespace. Our code readability drops dramatically.

So what is my recommendation for slugification?

Using bashew in GitHub Actions • 15 Oct 2022 • GitHub Actions, used in countless CI/CD setups, are a good example of the ubiquity of bash scripting. Most of the run: lines in an Action YML document are nothing but (a sequence of) bash command lines.